There are literally hundreds of supplements on the market targeted at body builders and meant to increase your body size. They are designed to maximize the body’s natural abilities and help you get the body mass you want.

How do you know which supplement is right for you? 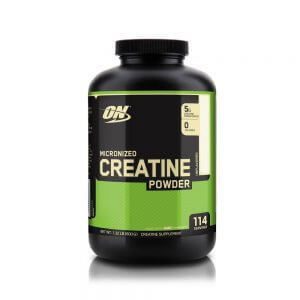 Creatine
Creatine is the most popular and commonly used sports supplement available today. There are numerous studies backed by anecdotal evidence that support the efficacy of creatine supplementation.

For the majority of the population, including both elite athletes and untrained individuals, creatine supplementation increases fat free mass and improves anaerobic and possibly aerobic performance.

Creatine is a natural constituent of meat, mainly found in red meat. Creatine is manufactured naturally in the body from the amino acids glycine, arginine, and methionine. This process takes place in the kidneys, liver, and pancreas.

Approximately 40% of the body’s creatine stores are free creatine (Cr), while the remaining 60% is stored in form of creatine phosphate (CP).

The typical male adult processes 2 grams of creatine per day, and replaces that amount through dietary intake and fabrication within the body.

Creatine is used for the resynthesis of ATP. ATP, or adenosine triphosphate, is the “power” that drives muscular energetics.

When a muscle is required to contract, the bonds in the ATP molecule are split, yielding ADP (adenosine-diphosphate). The energy released by breaking this bond powers the contraction of the muscle.

When ATP is depleted within the cell, the cell can no longer contract. There are several methods by which the body rebuilds ATP.

The fastest method, without oxygen, is through CP. Creatine phosphate is “split” to yield the phosphate portion of the molecule.

This phosphate portion bonds to the ADP, turning it back to ATP. Once CP stores within the cell are depleted, the body must use other methods to replenish ATP.

Supplementation with creatine increases Cr and CP within the muscle, allowing further capacity to regenerate ATP.

In other words, the creatine enhances the ability of the muscle to maintain power output during brief periods of high-intensity exercise.

The periods are brief because the ability of a cell to store CP is limited, therefore the body will quickly move to other methods of replenishing ATP.

There are two way to decide what dosage of creatine you should take. In the “loading phase” which is where you begin adding creatine to your diet, the dosage is 20 grams a day for five to seven days. After that, it’s recommended that you stick to 5 grams per day.

You can also calculate creatine dosage according to body weight and mass. Follow along closely, this could get confusing! Not really, though.

Experts say in the “loading phase”, you should be consuming .3 grams of creatine per kilogram of body weight. So if you weight 200 pounds, the formula would look like this:

After the loading phase, your weight is multiplied by .03, so you would require 2.7 grams in the maintenance phase.

Essentially, creatine can create muscle fullness as well as create an environment within your body that is conducive to muscle growth. It can also delay fatigue during repeated workouts.

However, you must use your creatine regularly instead of sporadically for it to be effective.

Creatine is also thought to increase the body’s aerobic abilities. One study showed that using creatine supplements help to reduce the oxygen cost of activity so less strain is placed on the cardiovascular system while performing aerobic activity.

This is a huge advantage for the body builder as this means you will be able to work harder and longer losing fat and building up muscle.

Creatine is safe for most everyone to take with the exception of people with renal issues. Doctors are even beginning to endorse creatine which is generally unheard of with supplements.